With Overwatch’s new ‘Avoid as Teammate’ feature released to the wild recently, it’s clear that Blizzard is pretty serious about dealing with what they deem to be toxic players. Jeff Kaplan, the game’s director, has made public statements saying as much. Reporting features are nothing new, but some seem to work better than others. Even in the cases where the system does work, is that even a good thing? What if the person being toxic is your friend? 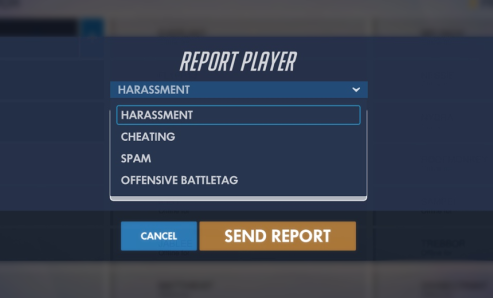 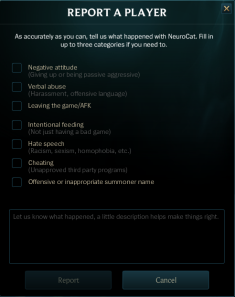 Some sort of reporting system for abusive or excessively trolling players has existed in online games for over a decade now in many forms. Some are slick in game systems with custom interfaces that send information directly to the company, and some are just an email address for customer support. These systems have been largely ineffective though for a myriad of reasons. It is difficult to completely automate such a process for a developer. The company still has pay someone to sit there and review those reports, and many times that is something a developer is simply not willing to do.

In the recent past, reporting someone would not yield any results. It felt unrewarding. You have no idea what happened to your report, or if it was ever even reviewed, and you feel as if you are still running into just as many bad teammates. Overwatch has again attempted to take the lead here, by informing reporting players when action has been taken against a player that they reported. In addition, players that have been ‘avoided’ using the new feature will be notified. I’m not sure I really agree with this approach. In a way, it feels like being rewarded for turning people into the authorities.

I would argue that we don’t need such measures to regulate behavior. Instead of reporting, try engaging with overwhelming positivity. The phrase “kill them with kindness” comes to mind. When the whole team is feeling down and playing poorly because that one guy just won’t stop flaming everyone. How would you approach the situation if this person was your friend?

Engaging with these people head on not only allows us the opportunity to create a better place to game in, and without the need for developers to step in and spend their resources on it, but it also allows us to improve our gameplay in the moment. Just as a negative nancy on your team can bring everyone down, we all have the power to bring the team back up. A joke to put them at ease, a dash of encouragement to get the confidence surging, and just a bit of praise to get the team synergizing.

Looking forward, I hope that these kind of reporting features become an unnecessary relic of the past. We can look back and say “Remember when that was thing?”. But for now, there is work to do. Whether you report someone or not, just know that reporting  may not actually change anything, but engaging puts that opportunity directly in your hands. Game in harmony my friends.