Balance in games is a simple mathematical equation. If two players can approach the game from a different perspective and compete against each other in a way that gives them both a chance of winning, we say the game is balanced. For example, in a role playing game a sword may seem balanced if it swings slowly but does a large amount of damage. In reverse, we may call it balanced if it attacks very fast but does light amounts of damage with each hit. In the case of Multiplayer Online Battle Arena games, such as League of Legends or Heroes of The Storm, one may argue the point of the game is to defeat the balance of the other team using a combination of players and characters. Even in the case where one team is unbalanced, the player usually understands that they needed character X instead of character Y. It’s a complicated process but ultimately it boils down to a pretty simple idea. So why are we, the players, seeking to upset the balance so wildly? Enter the Zerg Problem. 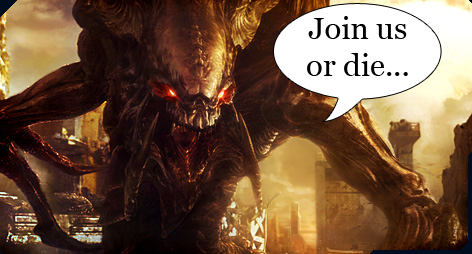 In many massively multiplayer online games, players are encouraged to form clans, organizations, corps, battlegroups and federations. Most of us just call them “guilds”. The idea goes back to our history when guilds were prominent in the middle ages, though the clan mentality has existed since the earliest days of man. If you’re familiar with the world of online gaming, you’ve no doubt played with such an organization in your past. Simply put, a guild makes an MMO better a better experience. It gives you a group of friends with which to conquer challenges together. When talented players come together to form a guild we often watch in amazement at what they can accomplish. While some games place a cap on how many players can be in a guild, nothing seems to stop the ravenous thirst of some of these groups to grow larger and larger. We have a name for those as well, zerg guilds.
Zerg guilds look to acquire a large number of players and typically take anyone that can apply pressure to a keyboard. Their leaders have a variety of goals but the most basic is to upset the balance of games by throwing a larger number of players at a problem. Let’s return to the previous equation. If two players fight using a heavy sword and a light sword and those two things are balanced, we expect them to do fairly well against one another. If they’re of equal skill it should be a good fight for both of them. So what happens when the first player shows up to the fight expecting a one versus one and instead he gets a one versus ten? It would be an incredible feat if the individual won, and it does happen, but most of us can agree it’s not the expected outcome.

For a real world example, if a pro basketball team went up against a college basketball team, you’d expect the pros to win. However, if that same pro team went up against ten high school teams all in the same game, you’d see a chaotic clusterflip of strange tactics that somehow lead to the high-schoolers winning by default. This is the goal of zerg guilds, to overwhelm players of any skill level by sheer numbers to accomplish their own goals. Does this have a negative impact on gaming? Does it need to be changed? Most game designers don’t seem to think so. If you take your favorite MMO right now and google “Largest guild in X” you’ll likely be taken straight to them. The first thing they’ll do is let you know exactly how large they are. A guild with twenty thousand players doesn’t mean there are twenty thousand people online, but it does represent twenty thousand sales. That’s a hard thing for a publisher or designer to ignore.
However, zerg guilds do bring a negative element to online worlds. Consider a new player that has entered an MMO and wants to compete. One of the first things they’ll be met with is an invite to these zerg guilds, just like when Tom wanted to be your friend on Myspace. In many cases, this process is automated and the guild is just playing the numbers. If they send out a thousand invites and only ten percent reply to them, they’ve gained a hundred new members. A guild with a hundred members is already a massive organization. If that player stays with the guild they’ll go on to join the zerg mentality, a voracious hunger to consume everything in its path. Inevitably, the zerg guild is going to fight the non zerg guild and both will take it as a matter of pride to win. It is a losing battle for the little guy but it does make for fascinating stories when they win. 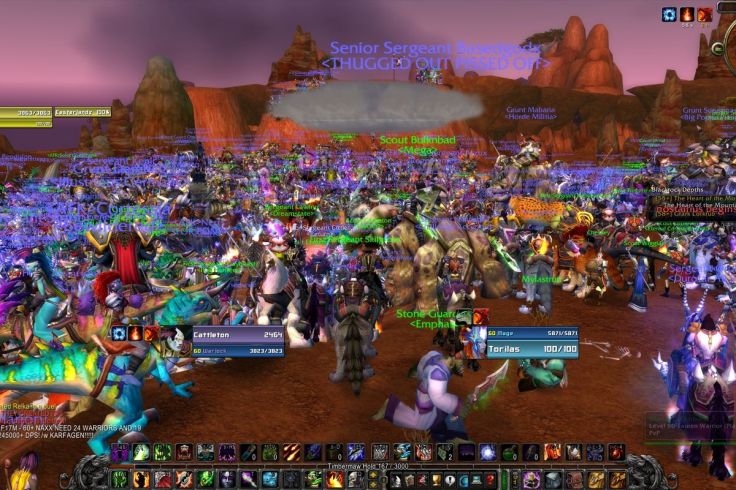 For all of this description, it does little to speak on the other aspects of zerg guilds. Often times, they are run by a leader who realizes they can monetize their large numbers in a variety of ways. This is done through media content through Twitch or YouTube. If the guild has a good reputation they’ll often publish merchandising for their members. The options are limitless but it does represent a financial gain for the leadership of the guild. Which means anyone that comes after the zerg guild is now coming after their money and that’s a dangerous combination. It has lead, in many cases, to real life death threats, Twitter wars, doxxing and DDOS attacks just to name a few of the consequences. This is the true heart of the zerg problem and not one that is likely to change anytime soon.
Despite how it may seem, zerg guilds aren’t always horrible. They offer a great deal of fun for their members and a sense of belonging. Smaller groups that hold victory over the zerg have a permanent mark of honor that they show off for years to come. When these zerg guilds fall apart, a frequent occurance, it causes a great deal of drama and entertainment for everyone watching. Developers love them as well as they act as free advertising for their game. Certainly, there’s a lot of concern when they’re allowed to run rampant and some players will always look to fight against the ever growing swarm. In all things we should seek balance and while we’ve mastered the art of equal game mechanic,s we’re still a long way off from applying that to players. Some might say it’s a constant battle that will continue to rage in every online game to come. In the immortal words of Ron Perlman…